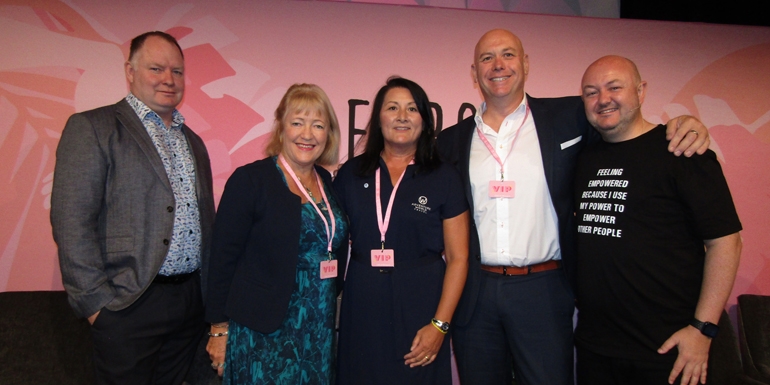 Leaders in the travel industry have been encouraged to create an environment where no-one can hide when it comes to creating a diverse working place and giving equal and fair opportunities to all.

On a panel at A Force for Good in Auckland yesterday, David Coombes, managing director of Flight Centre Travel Group says companies need to ‘walk the talk’ on the issue. ‘It is important to set up people for success and develop them through leadership programmes. That means when they have the opportunity to apply for a role they are well equipped for it. ‘And if there is someone who does not align with our values there is somewhere else for you to go.’ Fellow panellist Robyn Galloway, managing director of Innovative Travel, points out that research has shown that companies with at least three females on their board are more successful than those completely male dominated. ‘So why aren’t (more) companies seeking more diversity?’ Simon McKearney, executive general manager of helloworld, says that if women are not empowered in their workplace they will often move on and shape their own careers. ‘Some feel there are too many d… swingers in their organisation so they move on and become successful entrepreneurs and leaders. They are getting on and doing it.’

Caryn Young, general manager of Adventure World Travel New Zealand, accentuated a message that was often emphasised during the day. ‘Actions speak louder than words. At Adventure World Travel we made a decision to move away from mass produced wallets and replace them with sustainable ticket wallets produced by women in Rajasthan.’ She says this provides more security for the local people as a whole and also enhanced the women’s position in the community.’ McKearney noted that the Travel Agents Association of New Zealand (TAANZ) had taken big steps to better reflect the make up of the industry recently. ‘I was proud to be elected to the TAANZ Board a couple of years ago but I was even prouder to step aside and be replaced by two great women from helloworld – Kim Grafton and Jackie Bell. We (TAANZ) now have a total of four of the best female leaders in the industry on the board. Things like that can bring meaningful change.’