Whisked away for whiskey 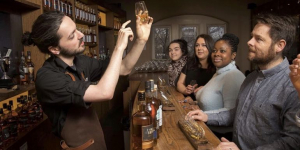 Irish Whiskey’s ‘serious revival’ has not only given rise to an influx of new distilleries but also led to the formation of several tours based around the spirited beverage.

John Callely, founder of Whiskey Island Premium Tours and Tastings, says that for a long time the island of Ireland’s whiskey industry lay dormant. ‘At one stage we were down to just two distilleries, now we have 39 and more (about 25) on the way.’

He says whiskey trails offered to guests take in a number of distilleries but also stop at some of the historical, cultural and scenic highlights along the way.