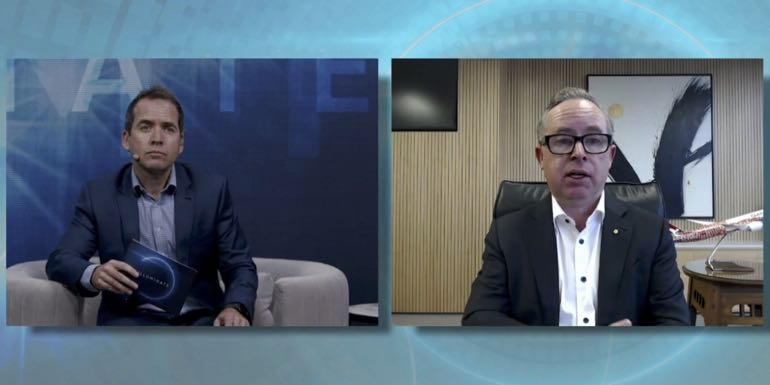 The aviation sector’s road to recovery is not likely to be dialled back as nations and states begin to make it clear they are prepared to live with Covid-19 and reconnect, says Alan Joyce, CEO of Qantas.

‘We are in a different space than we were six months ago. Our largest (most populated) states are opening up, while still having protections.’

He says much of the world is six months ahead of Australia and are continuing to open more. ‘I don’t think we will be turning back this time – I think it is a one way direction.’

Joyce says he expects Qantas / Jetstar to be flying 100% of its domestic network by February next year, with most states (barring Western Australia) opening before Christmas.

‘Melbourne – Sydney is down to one flight a day at the moment, from 55 a day pre-Covid. We envisage having 15 flights (on that route) daily from 1 November and be up to 30 or 40 a day by Christmas.’

Joyce has welcomed New South Wales’ move to allow travellers (albeit restricted to Australians at this stage) to return without quarantine.

‘Test and release is the way much of the world has gone and it is the way to get business travel back up again.’

Joyce reiterates the plans to be flying to Los Angeles and London on 1 November, with Canada , Singapore and Tokyo services before Christmas.

‘We’d like to have our whole network back by July next year.’

He says that apart from mask wearing and the prominence of hand sanitiser, customers can expect the usual Qantas service.

Joyce says passengers will be able to access the first class lounge in Sydney and other domestic lounges from 1 November, with access to international lounges progressing as routes open. Wifi and entertainment on the aircraft remain an important part of the offering.

He says the airline had a frequent flyer points sale on Tuesday this week, which was the largest day of points redemption in Qantas’ history.

‘There is a huge interest from people planning their trips.’