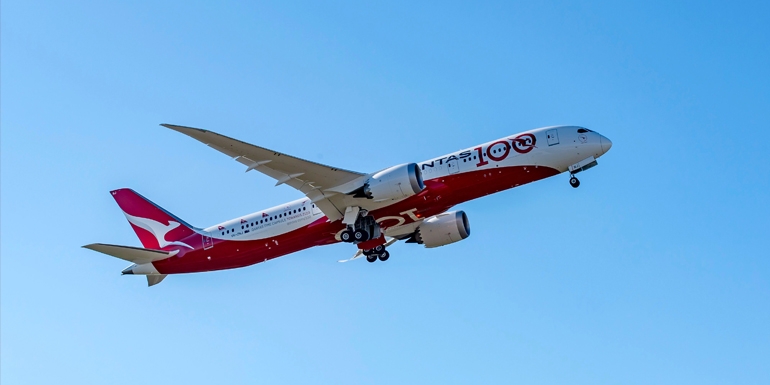 A new Dreamliner featuring every Qantas logo since 1920

The airline kicked off 12 months of centenary celebrations as it marked a fresh milestone in aviation with a non-stop London to Sydney flight. It was flown by the latest addition to the fleet, a new Boeing 787 Dreamliner, which landed in Sydney at 12:28pm, 19 hours and 19 minutes after leaving Heathrow. It follows the non-stop New York to Sydney flight last month as the second of three research flights aimed at improving crew and passenger wellbeing on ultra long haul services under consideration.

The direct flight reduced total travel time by around three hours compared with current one-stop services from the east coast of Australia. It is only the second time any commercial airline has flown this route non-stop, after Qantas flew a near-empty 747-400 in 1989. Components of the centenary celebrations include special livery on a new Dreamliner that will feature every Qantas logo since 1920; a $1 centenary coin that will enter circulation next year; and a touring exhibition that will visit a number of cities around Australia. Group CEO Alan Joyce says that almost a century after Qantas’ first flight, Qantas and Jetstar carry more than 50 million people around Australia and the globe each year.

Tweet
More in this category: « New regional lounge at AKL New at SQ »
back to top