What is believed to be the first substantial and dedicated brochure for Papua New Guinea in the New Zealand market is set to be released to the trade early in 2020. 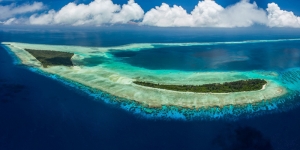 P&O Cruises Australia has six new cruises to Papua New Guinea in its latest programme, calling at Alotau, Kitava Island, Rabaul, Kiriwina Island and the Conflict Islands. Among the highlights is a new 11-night round-trip voyage to one of the most remote locations in the Coral Sea, the Conflict Islands. The cruise on the Pacific Aria departs Sydney Harbour mid-November 2019 and calls at the group of 21 islands.

In 2016 P&O became the first cruise line in the world to offer calls to the Conflict Islands. Also included are five 10-night New Guinea Island Encounter cruises departing Brisbane with an option for families to take advantage of the two Papua New Guinea cruises taking place during the school holidays. The brochure has six new one-way cruises to or from Singapore including an 18-night Australia and Southeast Asia Discovery cruise departing Adelaide in March 2019.