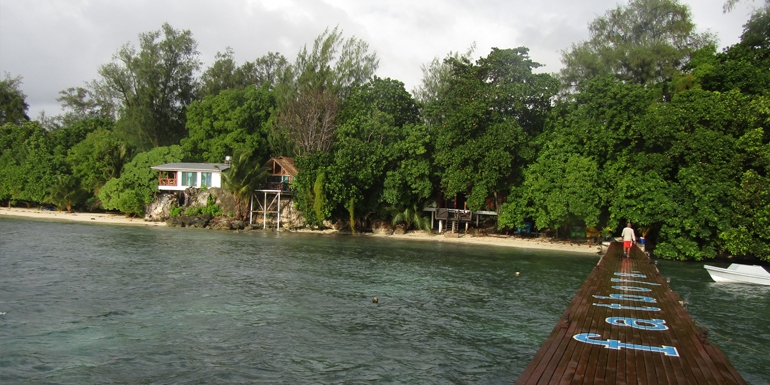 Finding the way to Fatboys

Fatboys Resort’s restaurant and bar juts out onto the ocean like a beacon for guests and is an immediate introduction to the laid back atmosphere of the place (it’s where arriving guests disembark).

Fatboys is one of the most established resorts in Gizo, Solomon Islands, with a few more of the comforts and efficiencies western guests are used to than some of the other accommodation providers in the region. It has six units – two family rooms, three couples rooms and a beach house with two separate rooms. All have views across the sea to small islands and sand bars. Manager Manoj Dhari says the guests are 90% Australian though he sees a few Kiwis in-house. It is a market he would obviously like to expand. ‘We are working with a couple of wholesalers there and we would like to do more.’ Like the Solomons in general, Fatboys’ clients are overwhelmingly divers (about 70%) but it also attracts fishers and those looking for an island escape without the crowds - honeymooners, other couples and families with an inkling for soft adventure. There’s plenty to fill the days – for example, a trip to nearby Kennedy Island with its war history; PT109 that was sliced in half by a Japanese destroyer during WWII. Among the crew was the yet to be President JFK. For snorkelers, Njari Island is not far away either. Guests can walk straight off the beach into a marine sanctuary that includes some 265 different species of fish. It has earned the nickname ‘grand central station’. A special treat in the evening is a ‘wine down’ on a nearby sand bar, watching the sunset while enjoying a drink. Another option is to hire a polycat boat from Fatboys and explore the nearby islands at leisure.