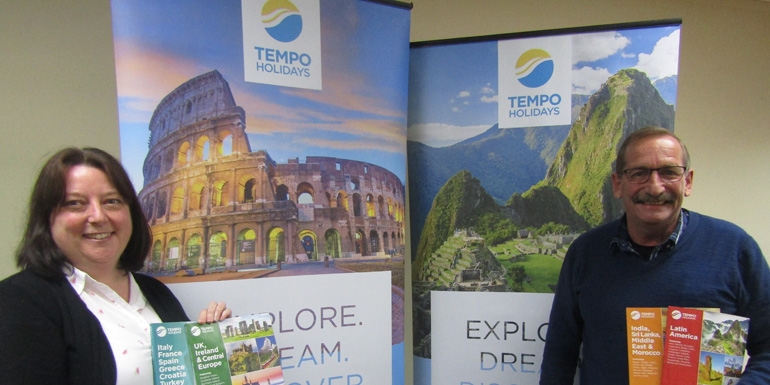 With the new Tempo brochures… Cherie Adams and Greg Osborne

A dedicated Latin America brochure, a return to form by Middle Eastern destinations and new personalised experiences in UK – Europe are among the highlights of Tempo Holidays’ new brochure release.

In terms of European offerings, product manager Cherie Adams says the number of self drive and rail travel options have been increased. ‘The self drive market is definitely growing, especially in the UK where you have a strong VFR market and other travellers who enjoy the freedom of driving. ‘But for those not so confident, rail gives them the opportunity to really see the countryside without having to drive.’ Adams says the range has grown in other ways – with 11 new small group tours and eight new coach tours just for UK – Ireland. ‘People are also looking at remote parts of Wales as well as Scotland – the latter is really strong.’ Two new whiskey tours have been added to the Scotland choice. In the Mediterranean-focused brochure, experiences such as farm stays in Italy with cooking classes are among the personalised choices.

Tweet
More in this category: « Industry gain from CAPA event Influencers a lucrative market »
back to top