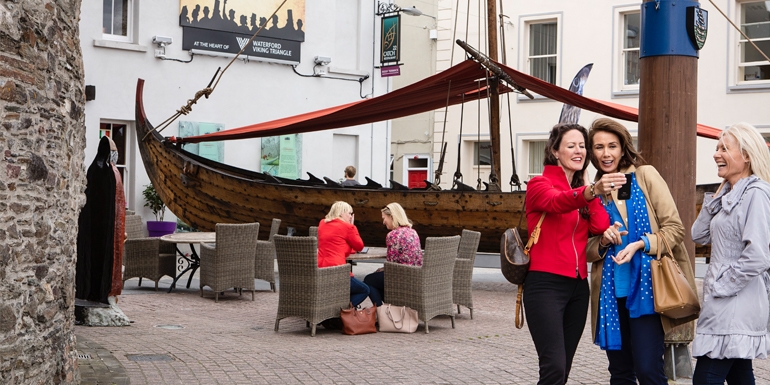 The History Channel’s TV show, Vikings is back in December for a concluding season six with Ireland again playing a starring role.

Filming locations in County Wicklow are an hour’s drive from the centre of Dublin. Kattegat, the village base for series hero Ragnar and his family, is at Lough Tay. Also used for a variety of Vikings locations and sets, and popular among hikers and kayakers as it’s close to the Wicklow Way walking route, is Lough Dan in the Wicklow Mountains. Scenes where the Vikings sail on their longships to discover new lands are set at the Blessington Lakes in Wicklow, and at Powerscourt Waterfall, Ragnar first met Aslaug, his future wife.

The Vikings first turned their attention to Ireland in the eighth century and the country’s oldest city, Waterford, was founded and shaped by them. It’s home to the Viking Triangle where there are three museums – Reginald’s Tower, Medieval Museum and Bishop’s Palace Museum, collectively known as Waterford Museum of Treasures. The story of the Vikings in Ireland is also told in Dublin at the medieval museum Dublinia. The city also features the Viking Splash Tour, a land and water ride at the hands of friendly Viking guides. www.ireland.com

Tweet
More in this category: « Exotic Holidays ‘off to Europe’ Dracula undead in Dublin »
back to top