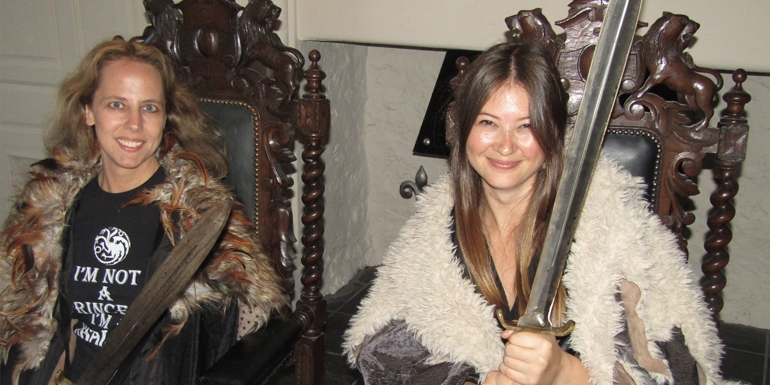 Ballygally Castle Hotel is across the road from the Irish Sea with views over to Scotland. A popular stop on the Causeway Coastal Route, the hotel even has its own (friendly) ghost.

The story goes that Isabella Shaw delivered a girl rather than a son to the castle’s original owner. The child was killed and Isabella locked in a room in a turret of the castle. From there she fell to her death (was she pushed or did she fall?) and is even today looking for her lost daughter. That was back in the early 1600s and the hotel (owned and managed by Hastings Hotels for nearly 60 years) still attracts its fair share of ghost hunters, says general manager Norman McBride. Now they have been joined by a new breed of seekers – those travelling Northern Ireland to see and touch reminders of Game of Thrones.

While Ballygally did not itself feature in the series, nearby locations did and the castle itself has one of the ‘10 doors’ that are scattered around Ulster with depictions of GOT scenes. They were all built from wood that come from trees on the Dark Hedges (Kingsroad), blown down by a storm a few years ago. The door at Ballygally depicts a famous battle between House Stark and House Bolton in season six. McBride says that while it is hard to quantify the effect GOT is having on business, the hotel currently runs at 92 to 94% capacity in summer, 70 to 75% in winter – well up on a few years ago. ‘We get the people on official tours, and those who join us for GOT activities, but there are also people travelling independently who visit Game of Thrones sites.’ McBride is the chairperson of the coastal group involved in tourism in The Gobbins. ‘In the past people have maybe stopped for a night on their way to the Giant’s Causeway. Our goal is to give them a reason to stay longer and Game of Thrones has certainly helped us do that.’

Tweet
More in this category: « The power of film tourism Win a Mont Blanc famil »