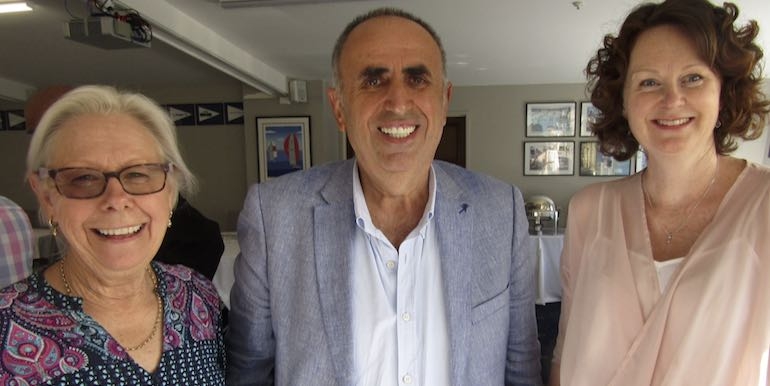 Ekrem Usta of Fez, with Alyson Wilcock and Wendy Powell, both NZ Travel Brokers at the Auckland Fez event

South Caucasus, encompassing the destinations of Georgia, Armenia and Azerbaijan, is among the new frontiers for New Zealand travellers, agents heard at roadshows around the country last week.
Fez Travel and GSA Exotic Holidays visited a number of centres, culminating in an Auckland presentation at dinner at the Royal New Zealand Yacht Squadron on Friday night.
Fez managing director Ekrem Usta says the company is seeing renewed interest in Egypt and Turkey, as well as having continued success in areas such as The Balkans. However, it is also seeing interest in Caucasus – a region that has an increased profile in the company’s 2019 brochure.

Canaan Karaarslan, Fez marketing and product manager, says that while the ex-Soviet areas will appeal to clients with a sense of discovery agents should not restrict their recommendations to the ‘most adventurous’ travellers.
‘This is the forgotten frontier of Europe. It is showing big growth for us out of Australia and we think the same will happen from New Zealand.’
She says the new brochure highlights four new small group tours – the 10-day Caspian to Black Sea; 18-day Caspian to Constantinople; 13-day Constantinople to Yerevan; and 10-day Georgia Classic.
Highlights in the region include the Caucasus Mountains, the cave cities of Georgia, Joseph Stalin’s hometown of Gori, and Mishketa with two UNESCO World Heritage Sites – Svetitskhovloba Cathedral and Jvari Monastery.
Early bird specials, new products and the most popular tours were all in the sights of travel agents who attended the road show.
Rahul Sharma, managing director Exotic Holidays and GSA for Fez Travel, was delighted with the response in all centres.
‘In Christchurch we hosted serious agents with enquiries arriving the very next day; we had positive feedback from Hamilton and Palmerston North was a huge success, with a lot more interest than we expected.’
In Wellington, a strong agent turnout at Pasha Café heard the Turkish Ambassador, His Excellency Mr Ahmet Ergin, extol the virtues of travelling in Turkey for both its adventure tourism and history. He described the country as the cradle of civilisation, and thanked Fez Travel for encouraging New Zealanders to visit.
Fez Travel’s Canaan Karaarslan says Turkey had been through a ‘rough few years’ but assured agents the country was now safe and comfortable to travel in. She says, as well as Turkey, the company offers small group and specialist tours throughout neighbouring regions, including the exciting ‘new’ destinations formerly part of the Soviet Union.

Tweet
More in this category: « Agents – sign up for Swiss chance to win Luxury Barging in France »