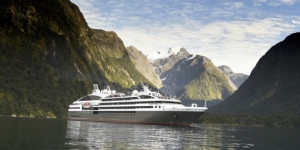 Travel trade and tourism operators were last night clinging to at least some hope that PONANT’s domestic cruising season around New Zealand will take shape in one form or another.

Yesterday the cruise line was continuing to talk to Immigration NZ after its shock last minute decision to prevent Le Laperouse from coming to New Zealand – despite having the green light from the Ministry of Health. At the time of going to press it was believed a final decision would be made today.