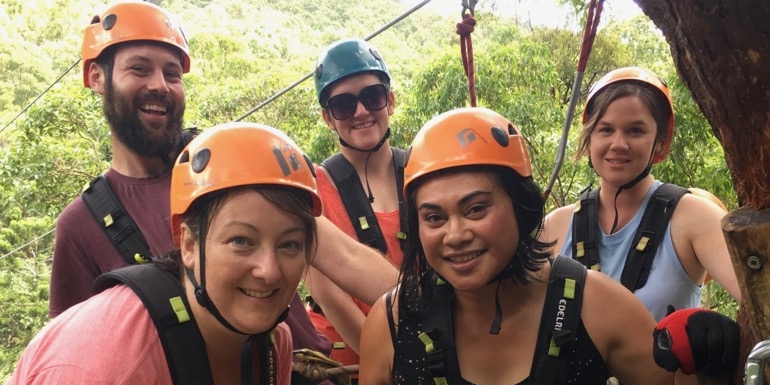 This year’s Gold Coast Mega Famil saw a Kiwi travel trade group of 27 discovering local product and spots like the hinterland that they didn’t even know existed.

‘I was expecting surf culture, gym junkies, health drink shops and the beach. But it’s so much more than that. The hinterland is a huge aspect that isn’t really considered, especially when people are booking their trips, they

‘Getting out to Mt Tamborine and doing the zip lining was absolutely incredible. It’s been quite a life-changing experience to be honest, which I didn’t think it would be. It’s broadened my horizons, and will absolutely change the way I sell the destination.’

Over five days, the 27-strong group got a taste of both ends of the coast, staying at Oaks Calypso Plaza in Coolangatta, and the recently opened Avani in Broadbeach.

‘The big thing about it was showing an alternate view of the Gold Coast,’ says Michael Thurston, manager global partnerships, Gold Coast Tourism.

‘The different neighbourhoods and beach precincts that all have their own different identity and showing the depth that the city now has.’

Thurston says what really showcases that depth is the unexpected, live-like-a-local moments that are there for the taking.

‘For instance, the funky street food and live music venue Miami Marketta that was developed by a group of artists trying to find a space to work from. They rented it out, and to fund the arts they were making they then created the Marketta, which has now become a local institution,’ he says.

‘There’s a lot of innovation going on and it’s a really exciting time on the Gold Coast.’