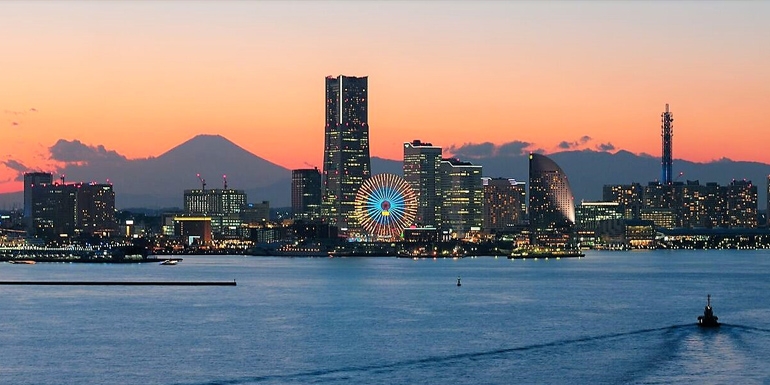 All eyes on Yokohama

Come 2 November next year, all going well for the All Blacks, all eyes will be on Yokohama and the Rugby World Cup final.

Both semi-finals will also be played in Yokohama. Yokohama tourism managers are urging Kiwi rugby supporters to base themselves in the city instead of bigger, neighbouring Tokyo for this business end of the tournament. ‘Tokyo can be very expensive, Yokohama is so well connected by train it is easy to travel anywhere, and we have so much to do here outside of the rugby,’ says Megumi Nemoto, Yokohama Japan Tourist Department. A focus for fans will likely be Minato Mirai, downtown Yokohama, in particular the Noge district, with its choice of 400 pubs and bars in a two square mile radius! Craft beer bars are prolific, while for mainstream beer pundits Kirin Beer Yokohama Factory offers a free tour with tastings. Museums are rife in Yokohama, and fun, for example the Ramen Museum that’s described as ‘Japan’s first food amusement park’. There are also museums focused on ‘cup noodles’, dolls, model railways and children (cartoon characters and animated themed toys, adults love them!).
For technology and car things; there’s the Nissan Engine Museum, The Nissan Engine Assembly Line Tour, and the Mitsubishi Industrial Museum. For the culturally-minded, the Great Buddha of Kamakura, a massive 800 year old bronze statue at Kotokuin Temple in Kamakura Town, 35 minutes by train south of Yokohama, is regarded as one of Japan’s most famous icons. Two hours away by train is Mt Fuji Lake Kawaguchi, famous for its open air onsens (bathing pools) with views of sacred Mt Fuji. The 73,000 seat International Stadium Yokohama, also the venue for the All Black’s RWC opening game against South Africa on 21 September, is located in Shin Yokohama, just 15 minutes by train from downtown Yokohama. (Shin Yokohama Train Station is packed with dozens of amazing, affordable restaurants.) Haneda International Airport is close to Yokohama (25 minutes by train), Narita International Airport is a more distant 90 minutes. Air New Zealand recently suspended its direct Auckland/Haneda service, but flies direct up to ten times per week to Narita. Fiji Airways also flies through Nadi to Narita two to three times weekly. However, Haneda offers several daily connections with Australian ports and comprehensive domestic connections throughout Japan.

- By Kathy Ombler in Japan