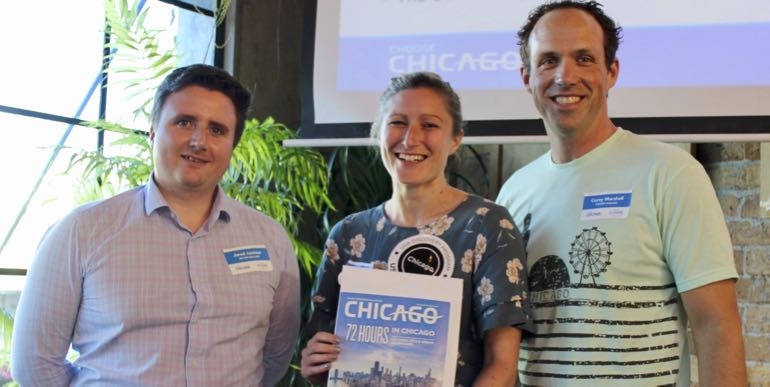 Chicago will be a mega city by 2025 when it is expected to surpass 10 million residents, is the third largest metropolitan area in the United States and is the corporate headquarters for 400 companies including McDonalds and HSBC.
Corey Marshall, Choose Chicago, says that makes the destination great for ‘bleisure’ travel and the new direct flights mean that business travellers will be inclined to extend their stay or bring partners/families for leisure activities.
Chicago has two airports that service 102 million passengers annually to 1460 different destinations around the world.
Over eight billion US dollars is being injected into O’Hare Airport, which the Air New Zealand service will be flying in to, over the next five years.
Upgrades include the addition of a ninth parallel runway allowing for six flights to be able to land and depart simultaneously, increasing capacity by 50% and decreasing delays by 57%.
‘We’re investing in the future and you’re not going to hear about the Chicago delays anymore,’ says Marshall.
All Star Alliance airlines will also have a new global terminal at O’Hare by 2021.
Air New Zealand will fly to Chicago three days a week on Wednesday, Friday and Saturday in a joint venture with United Airlines.
It will operate the service on its new 787 Dreamliner which has 27 business, 33 premium and 125 economy class seats. Flight numbers will be NZ26 and NZ27.
Chicago is United Airlines’ hometown hub, where it operates 572 daily flights, 527 of which are across the USA as well as 45 daily international.
‘Once you get to Chicago on Air New Zealand you can get anywhere you want to go,’ says Leanne Cheesman, United Airlines.
Insider tips
• Chicago’s nickname of ‘The Third Coast’ hails from its location on Lake Michigan
• The central city is flat, meaning travellers don’t need to hire a car, and public transport is cheap with an all-day train pass costing US$10
• Magnificent Mile is a great place to look for accommodation during the week, and The Loop has the best rates on weekends
• Chicago is a year round destination with lots to do both inside and outside
• The city is known for its architecture, arts and culture – it is home to some of the world’s top museums and galleries
• It is also the start (or finish) of Route 66
• Chicago is known for its casual dining scene (the home of deep dish pizza) but also has 22 Michelin Star restaurants
• The same Broadway shows that are in New York are available in Chicago – often at a third of the price
• Sports experiences can help extend stays and agents can make use of upselling to sports games which travellers will often stay longer to experience
• There are also a huge number of festivals and events including the largest air and water show in the world