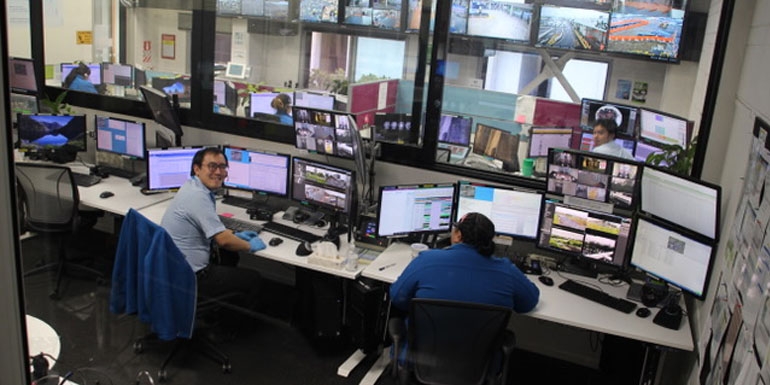 The team at AKL operations centre

Auckland Airport’s Operations Centre team is keeping the airport running smoothly in the face of COVID-19 by bringing in staff from other departments who have the right experience, and by splitting into three groups separated by drop-down dividers.

General manager operations Anna Cassels-Brown says the Operations Centre was typically staffed 24 hours, seven days a week by up to 16 people in a shift team, handling the everyday functions in both the international and domestic terminals. 'Our Operations Centre normally runs as one large, open space – banks of monitors keep staff up to date with everything going on from the traffic on the roads, to the gate areas and arrivals hall. This large, open-plan room is the nerve centre of the airport. 'During events like the COVID-19 pandemic, we have three large glass screens that divide the room. This keeps teams and people separate, reducing the risk of wider infection if one of our people is unwell.'

Twelve staff with previous experience working in the operations centre have been brought in from other departments at the airport to help keep systems running smoothly, and to support the work the Ministry of Health and government agencies are doing to protect New Zealand from the spread of COVID-19. Cassels-Brown says it was likely that some parts of both terminals would be closed in the weeks ahead due to low demand. 'Everything is operating at the moment, but if we’re able to close down parts of the terminals while they are not required, we’ll do so.'

Passenger numbers have continued to decline rapidly over recent weeks. This March, Auckland Airport has seen on average around 30 international flights per day, last March there were about 80 international flights each day. Cassels-Brown says airport staff whose normal job is to plan aircraft movements are now making plans for aircraft parking as the impact of the low demand was felt by airlines. Consideration was being given to closing Pier B and using the apron area to store wide-bodied aircraft. 'We’re working with Air New Zealand to find out how many aircraft they will need to park here. Our contingent parking plan allows for areas of the airfield to be safely closed off without significantly affecting operations.'