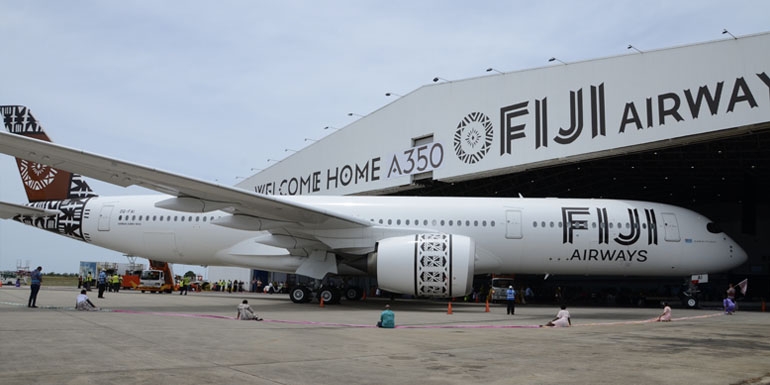 The first of Fiji Airways’ two new A350-900s arrived into Nadi over the weekend, on delivery via Brisbane and Sydney.

On board were 61 VIPs - manufacturers representatives, media and the Fijian Prime Minister Frank Bainimarama. The second A350 is due in Nadi on 16 December. The additions to the Fiji Airways widebody fleet will be used primarily to service the popular route between the US and Australia, via a stop in Nadi. The Los Angeles leg will operate six times a week compared to daily flights to and from Sydney. The A350 aircraft commence the daily Sydney service on 1 December, and on 18 December three weeks of daily flights to Auckland. The Los Angeles service is planned to start 22 December. Combining the latest aerodynamics, new Rolls-Royce Trent XWB generation engines and use of lightweight materials, the A350 XWB brings a 25% advantage in fuel burn, operating costs and carbon dioxide emissions compared to previous generation similar sized aircraft.

This means a significant reduction to the airline’s carbon footprint and fuel cost. The aircraft feature 33 fully lieflat business class beds in a 1-2-1 configuration offering direct aisle access. Economy class at 32 inch pitch features 301 seats with in-flight entertainment screens, in a 3-3-3 configuration. Thirty nine of these economy seats are designated as Bula Space seats with extra legroom at 34 inch. On board is the latest generation AVANT inflight entertainment system and wifi connectivity.

Tweet
More in this category: « Airlines calls for govt to reconsider Tasman Covid to have ‘long shadow’ »
back to top