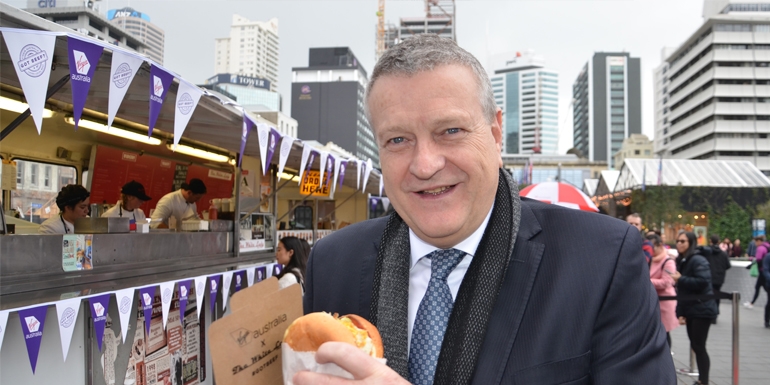 Make mine a burger...Rob Sharp, Virgin Australia group executive in Auckland this week

In October, Virgin Australia will launch two new Trans-Tasman routes between Wellington-Sydney and Queenstown-Melbourne, and seasonal services to Newcastle from Auckland.

Keeping up the momentum, the airline has also launched its Got Beef? campaign, and announced it will return to being a full service airline on international shorthaul. The airline gave away hundreds of free burgers when it partnered with iconic Auckland burger institute, the White Lady, to launch the Got Beef? campaign at Britomart in Auckland this week. The planned give away of 500 King Burgers (100% New Zealand beef, melted cheese, onions, fried egg, and lettuce) extended to 700 when long lines of people turned up.

During the burger feast, Rob Sharp, Virgin Australia group executive said the airline will offer all passengers on the Tasman, and on short haul into the Pacific Islands from Australia and New Zealand, a full meal and drink service, at least 23kg of free baggage, wifi on all flights – including 15 minutes of complimentary access - and increased Velocity Frequent Flyer Points and status credits earning potential included in the fare. The free burger giveaway is part of a nationwide search to find a local New Zealand meat supplier that will be contracted to provide meat products to be served on board Virgin Australia flights between New Zealand and Australia. The process will be completed shortly, and menus will be announced for the new inflight services. All New Zealand flights will be catered with local products where possible. The airline says another announcement will follow shortly on future lounge access for eligible passengers.

Tweet
More in this category: « FJ’s new Boeing to hit WLG first FJ – AS extend codeshares »
back to top